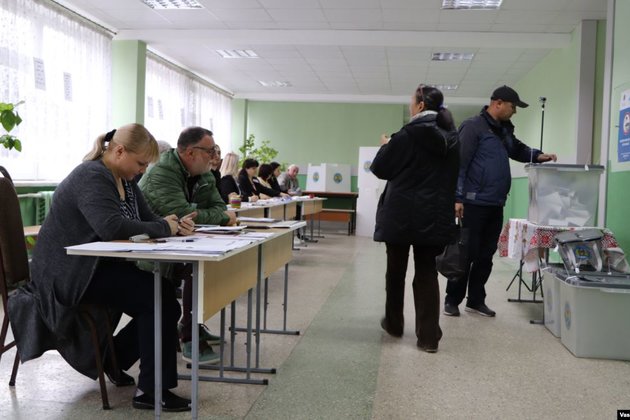 CHISINAU -- Voting has begun in local elections in Moldova, in its first electoral test since a pro-Western government took power four months ago following a bitter constitutional standoff.

At stake are nearly 900 mayoral posts and more than 11,000 local council seats.

Prime Minister Maia Sandu of the pro-Western Now Platform this week stood by her promise of 'free and fair elections,' while warning of the threat of 'provocations' and urging police to 'prevent and punish instances of abuse, should they occur.'

Polling stations opened at 7 a.m. on a chilly, fog-shrouded morning in Chisinau on October 20, with many analysts predicting that the capital would vote in its first Socialist, pro-Moscow mayor.

In a replay of a previous, disputed contest, preelection polling suggested Socialist Ion Ceban was the front-runner for the Chisinau mayor's seat ahead of another national ruling group candidate, ACUM Bloc's Andrei Nastase.

Moldovan law requires at least 25 percent turnout in each constituency for the vote to be valid.

Moldova has struggled to implement reforms urged by many in the West since the disappearance of more than $1 billion from state-owned banks five years ago shattered the already impoverished postcommunist state's economy and took down a government.

Inconclusive national elections in February bubbled into a major constitutional crisis in the summer and a showdown involving pro-Moscow President Igor Dodon, the Constitutional Court, and parliament deputies seeking to seat Sandu as prime minister.

The resulting situation was eventually endorsed by Dodon and Sandu, who has since led the country with support from a liberal-populist alliance in coalition with the Socialists.

Western critics have complained that political instability has hobbled efforts to buttress rule of law and democratic gains in Moldova, one of Europe's poorest countries.

The European Commission, in its 'association implementation report' in September, acknowledged that some economic and banking-sector reforms had advanced in Moldova but warned that 'fundamental structural reforms of the judicial system, the fight against corruption, the prosecution of the 2014 banking fraud, and ensuring media plurality were lagging behind.'

The country's aging infrastructure is another problem.

With reporting by Interfax

Washington DC [US], January 28 (ANI): The Joe Biden administration is currently reviewing the latest actions taken by the Donald ...