NATO Leadership To Visit Ukraine In Show Of ?Support? 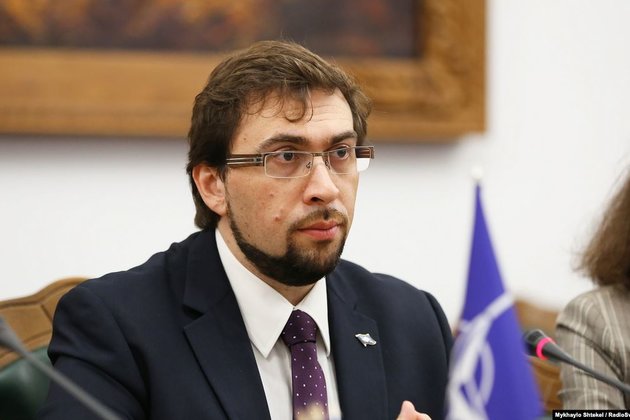 NATO's leadership will visit Ukraine for two days on October 30-31 in a show of support for the nation's sovereignty and the ongoing reform process, said Oleksandr Vinnikov, the head of Ukraine's NATO Liaison Office.

Speaking at a NATO-related event in Kyiv on October 21, Vinnikov said the NATO Council delegation will be headed by Secretary-General Jens Stoltenberg and will include visits to Kyiv and Odesa.

The purpose of the high-level visit is to "send a solid signal of support for the sovereignty and territorial integrity of Ukraine, with particular attention paid to the Black Sea, and also of support to the process of reform," UNIAN reported from the event.

During the delegation's visit to Odesa, joint events will be held with the Ukrainian Navy and the Odesa Maritime Academy National University and will include NATO warships calling at the city's Black Sea port.

Deepening "a positive dialogue" with President Volodymyr Zelenskiy, "the new government, and new parliament," is also a stated goal of the trip, according to Vinnikov.

Zelenskiy will also participate in a session of the Ukraine-NATO Commission, the decision-making body responsible for fostering relations with the alliance and directing cooperation.

Separately, meetings are scheduled with members of civil society on a number of issues, including the situation with the Crimean Tatars in Russia-annexed Crimea, and gender equality in defense and security, Vinnikov said.

Based on reporting by Interfax, UNIAN, Hromadske, and Ukrinform

NEW YORK, New York - Stocks in Asia were mostly on Wednesday, in line with the sell-off globally a day ...

Vouchers instead of refunds in case of canceled flights disappoint

One of the lessons the current coronavirus pandemic has taught us is that we depend on electronic devices more than ...

Demand for oil may have peaked

PARIS, France - Although crude prices have rebounded from coronavirus crisis lows, oil executives and experts are starting to ask ...

Countries across the globe re-thinking reopening as coronavirus surges

As coronavirus cases around the world approach 11.5 million, governments are struggling with how to reopen their economies, leading some ...

North Dakota pipeline supported by Trump ordered to be closed

A U.S. federal judge ruled Monday that a controversial pipeline that runs through Native American lands in North Dakota be ...

One of the lessons the current coronavirus pandemic has taught us is that we depend on electronic devices more than ...

Yair Netanyahu making name for himself at home and abroad

JERUSALEM - As scandal-plagued Prime Minister Benjamin Netanyahu stands trial for corruption, his 28-year-old son has emerged as a driving ...

Demand for oil may have peaked

PARIS, France - Although crude prices have rebounded from coronavirus crisis lows, oil executives and experts are starting to ask ...