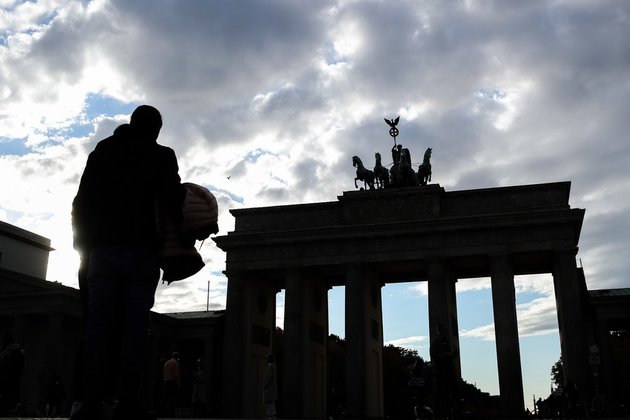 A tourist stands in front of the Brandenburg Gate in Berlin, capital of Germany, on Oct. 22, 2020. (Xinhua/Shan Yuqi)

The number of patients needing treatment in intensive care units also continued to rise, with 1,030 patients in ICUs as of Thursday.

BERLIN, Oct. 23 (Xinhua) -- New COVID-19 infections in Germany remained close to record levels and increased by 11,242 within one day, reaching a total of 403,291, the Robert Koch Institute (RKI) said on Friday.

This figure was just below the record of 11,287 new COVID-19 cases confirmed a day earlier, according to the RKI, the federal government agency for disease control and prevention.

"At present, we still have a chance to slow down the further spread of the virus," said RKI President Lothar Wieler at a press conference on Thursday, adding that "everybody can contribute to this."

The death toll in Germany rose by 49 within one day to 9,954 on Friday. The number of patients needing treatment in intensive care units (ICUs) also continued to rise, with 1,030 patients in ICUs as of Thursday, according to the latest RKI daily situation report.

A healthcare worker takes a sample from a driver at a drive-in test station in Dusseldorf, Germany, Oct. 16, 2020. (Photo by Tang Ying/Xinhua)

Germany currently has a capacity of just under 30,000 intensive care beds, of which 21,473 or 72 percent were already in use as of Thursday, according to the Association for Intensive Care and Emergency Medicine (DIVI) online registry for intensive care beds.

Most Germans support the country's COVID-19 health measures. Fifty-four percent of German citizens consider the current restrictions "just right," according to a Politbarometer survey published by the German public broadcaster ZDF on Friday.

Thirty percent of Germans even want to see stricter measures, compared with only 18 percent in mid-September and 23 percent at the beginning of October, the survey found.

Customers queue in front of cashier desks at a shopping mall in Berlin, capital of Germany, Oct. 5, 2020. (Photo by Binh Truong/Xinhua)

"The situation gets out of control at 20,000 new infections a day," Frank Ulrich Montgomery, chair of council at the World Medical Association (WMA), told the German newspaper Rheinische Post on Friday.

If daily COVID-19 infections rose to such levels, it would "no longer be possible for health authorities to trace and interrupt infection chains," Montgomery explained. "Then a second lockdown is threatening us because the virus cannot be slowed in any other way."

Tougher restrictions imposed on Tuesday in the Bavarian district of Berchtesgadener Land, which was the first in Germany to reimpose a limited curfew since spring, were important, stressed Montgomery, adding that it was right to "react consistently in the event of local outbreaks."

As the world is struggling to contain the pandemic, countries including Germany, France, China, Russia, the United Kingdom and the United States are racing to find a vaccine.

According to the website of the World Health Organization, as of Oct. 19, there were 198 COVID-19 candidate vaccines being developed worldwide, and 44 of them were in clinical trials. ■