While Colts focus on 60 minutes, Texans zero in on No. 28 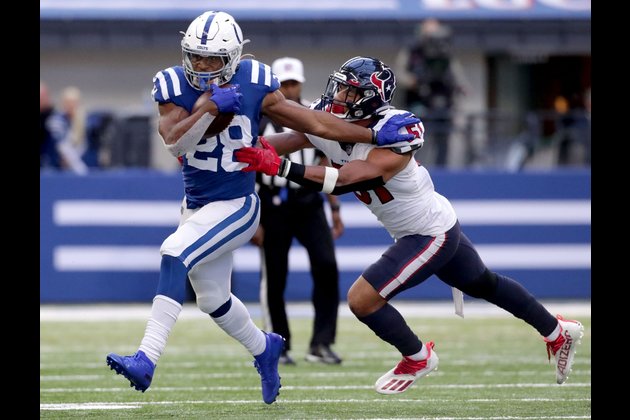 The Indianapolis Colts have grown maddeningly familiar with the concept of frenzied finishes, with their close loss last Sunday to the Tampa Bay Buccaneers the latest in a series of them.

In falling 38-31 to the Buccaneers, the Colts (6-6) recorded their fourth loss by one score. The Colts' lastthree losses, dating to Oct. 11, have come by one score, with overtime setbacks to the Baltimore Ravens and Tennessee Titans in that mix.

With the calendar flipped to December and the stretch run of the regular season ahead, Colts coach Frank Reich is taking a pragmatic approach toward doing what is required to qualify for the playoffs. That means a self-reflective focus on the remaining five games, starting Sunday when the Colts visit the Houston Texans (2-9).

"We acknowledged today the margin of error in these last five games is slim," Reich said. "So what do you do about that? You prepare and you focus and you keep getting better and build the momentum so that we're playing our best football in December and going into January.

"Just do what it takes to get in (to the playoffs) and feel like we've got the kind of team that can go somewhere."

In order for the Colts to meet that challenge, they have to improve at closing games. Indianapolis has enjoyed success early in games this season only to falter late, a routine that has Reich contemplating scripting plays late in the second half to match the proficiency shown in the first.

The chore of improving late in games isn't an extraordinary one. In fact, the approach is basic.

"It's just doing ordinary things and doing them very well, in whatever phase we're in," Reich said. "I think that's really our focus."

For the Texans and their 31st-ranked run defense, the challenge ahead is simple: Prevent Colts running back Jonathan Taylor from dominating the game.

Taylor leads the NFL in rushing yards (1,205), rushing touchdowns (14), yards per attempt (5.8), and is one of just two players averaging 100-plus yards rushing per game. The other is Derrick Henry, who is out for the season.

Taylor has the longest run from scrimmage this season (83 yards), and he produced 145 yards and two touchdowns in the Colts' 31-3 victory over the Texans in Week 6.

"J.T.'s been balling, and props to that guy," Texans defensive lineman Jacob Martin said. "He's been running his tail off all year. I think for us to be successful on defense, it comes to us playing gap-sound defense and limiting those big yards in the run game and those big shots on the play-action. I think us staying sound in the run game will lead us to playing their play-actions well, and trying to make the Colts as one-dimensional as possible."

That objective might seem too simple, but the stats are clear. Slow Taylor and triumph.

"We saw a stat this morning that when he rushes for 100 yards this year, they've won every game. When he hasn't rushed for 100 yards, they've lost," Texans coach David Culley said. "Obviously, it's very important for our defense to have gap control, especially run gap control. Stay in our gaps more so than any time this year, not that it's not as important as always, but obviously, this guy's playing very well right now."