Stem Cell Therapy for Stroke: Is It Safe?

After cancer, stroke is the second leading cause of morbidity and mortality in Europe. Stroke occurs when the blood flow to a portion of the brain is abruptly blocked, usually resulting in life-threatening repercussions.

The brain loses millions of neurons in a matter of minutes following a stroke. Cognitive, sensory, and motor functions can all be negatively affected, which can lead to the neurological consequences requiring long-term rehabilitation. With a variety of therapeutic options available presently, could stem cell therapy be a viable way out of this condition?

In this article, we present a brief review of the application of stem cells for stroke, how it works, its efficacy, safety, possible side effects, and additional essential information.

What are stem cells?

Stem cells (SCs) are a class of special cells that have the ability to adapt to their surroundings and develop into a variety of distinct cell types. This intrinsic ability of SCs make them suitable for restoring damage caused by several diseases, including neurological disorders such as strokes.

In theory, if SCs are administered to a patient with post-stroke condition, they will aid in the regeneration and healing process in the damaged parts of the brain following a stroke.

Stem cell therapy for stroke: how it works 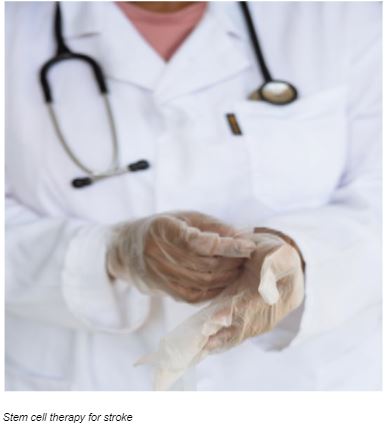 Neurological functioning can be restored with cell-based therapies which help repair or replace cells that have been damaged or have died. Stem cell therapy for stroke is a minimally invasive procedure in which SCs are transplanted into the bloodstream or into the spinal cord, from where they are then sent to the compromised regions within the brain.

Stem cells were initially thought to be able to penetrate and replace dead brain cells following a stroke. However, it's now well-known that SCs do not actually transform into brain cells. Instead, they stimulate the release of potent growth factors and chemicals that aid in the body's own healing mechanisms, including the formation of new synapses between neurons and blood vessels, as well as play a significant role in fortifying the immune system.

In a nutshell, stem cell therapy for stroke entails the transformation of an adult brain into a newborn or child's brain, which is far more capable of repairing itself after damage due to the high concentration of this type of cells.

Therapy based on SCs can produce several therapeutic effects that complement one another.

With additional rehabilitation, stem cell treatment for stroke may improve the neurological deficits and activities of daily living in post-stroke patients.

Stem cell treatment for stroke has been shown to be safe and has very few side effects in several research and clinical trials. However, suitable cell delivery procedures must be followed by the physician. Patients should also be tested and consulted to evaluate if they qualify for stem cell therapy because not everyone is.

Are there side effects in stem cell therapy?

Patients who undergo transplantation of SCs may experience short-term fever lasting several hours and sometimes mild fatigue lasting about a week. There are no more issues to be concerned about as no other symptoms have been reported or discovered.

Can the body reject stem cells?

Mesenchymal stem cells (MSCs) obtained from the patient's tissue or from donated sources such as cord tissue or the placenta do not pose a danger of rejection in the human body. These are young and undifferentiated cells that enjoy innate immunity as they've not yet been 'claimed' by the body. In addition, there are no blood components connection, which eliminates the need for a compatible donor in stem cell therapy for ischemic stroke.

What's the cost of stem cell therapy for stroke?

To give you some perspective, stem cell treatments for other parts of the body, such as the knee in arthritis, typically cost between $3,000 and $7,000. These are local injections with no need to stay at the clinic. In a post-stroke condition, long-term rehabilitation is required. This may include not only cell-based product administration, but other therapies as well. So, you should expect the cost of stem cell therapy for stroke to be several times higher since providing comprehensive in-patient treatment.

What's the healing period for this therapy?

A patient's recovery speed is unpredictable, and it is difficult to forecast how long it will take. Therapy works differently for each patient. Generally, to see effects, stem cells may take weeks or months to begin working.

Stem cell therapy for stroke holds great promise for the bulk of people suffering from this condition globally. Stem cell transplantation has been shown to promote stroke recovery in multiple studies and clinical investigations.

Positive therapeutic effects of this treatment include:

In turn, this allows to restore lost functions and enhance the effects of other therapies as part of rehabilitation in post-stroke conditions, improving the quality of patients' lives.

Have you ever tried this kind of therapy? Or do you know someone who benefited from stem cell therapy in managing post-stroke symptoms? Please, let us know.

This article does not push using stem cell therapy like any other treatment method. Each case is unique, and a patient has to consult with expert doctors to make a decision specifically in his or her medical condition.

SYDNEY, NSW, Australia - Stocks were in the doldrums in Asia on Friday as investors weighed up potential Federal Reserve ...

NEW DELHI, India: After a decline in prices reaching a 2-year low encouraged investors to purchase silver in 2022, India's ...

NEW YORK CITY, New York: The American hedge fund Third Point has purchased a stake worth some $1 billion in ...

NEW YORK, New York - Investors were divided on Thursday as to where to send U.S. stocks. Jitters about inflation, ...

Through investments, European Union seeks to gain influence in Pacific

WELLINGTON, New Zealand: During his visit to New Zealand, Ambassador Sujiro Seam, Head of the Delegation of the European Union ...

US approves sale of hearing aids without medical prescriptions

WASHINGTON D.C.: The U.S. Food and Drug Administration has approved the sale of over-the-counter hearing aids for people with mild ...