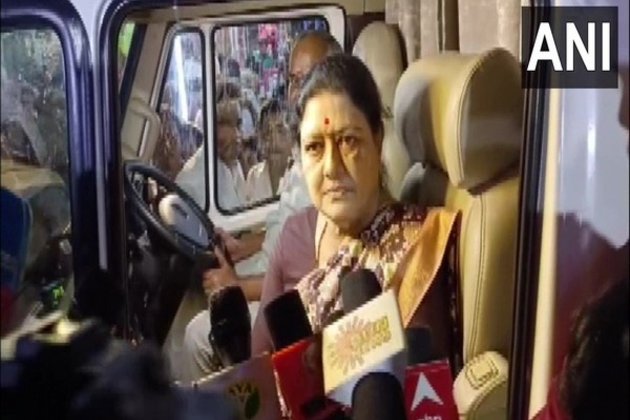 Chennai (Tamil Nadu) [India], July 6 (ANI): Former AIADMK leader VK Sasikala on Tuesday said that her wish is to take the party forward, the way MGR and Amma (Jayalalitha) did while adding that Tamil Nadu needs a leader who could walk the talk.

Sasikala said, "My wish is to take the party forward the way our leader (MGR) and Amma (Jayalalitha ) took it forward. Our cadres know it well. Not only that, there should be a leader who should be truthful and he/she should not speak different things in past and present, so that they can do good things for Tamil Nadu people."On being asked when she is going to join AIADMK, she said. "I am a general secretary of AIADMK and will go (to party headquarters) when the time comes.

On being asked whether the party needs a single leader or not, she said, it will be decided by the party cadres.

Sasikala stated, "I repeatedly say that its cadres wish is the final verdict. That's what I too wish."While talking about the general council meeting convened by the supporters of Edappadi K Palaniswami on July 11 to elect him as interim general secretary of the party, she said, "What's happening now is not a general council."Reflecting upon whether Edappadi K. Palaniswami trying to cover Kodanadu (robbery and murder case ) issue by raising a single leadership issue, she said, "I don't know about that. The current CM (MK Stalin) spoke two things during election time. One of them was Kodanad (robbery and murder) issue. He spoke on every street and promised that he will take action on the Kodanad issue once (DMK ) comes to power. The media should ask TN CM MK Stalin why he has not taken action till now.

Earlier on June 23, the meet was held amid chaos and the AIADMK General Council announced that the one and only demand of the General Council members is to bring in a system of a single leadership for the party, favouring Joint Coordinator EPS.

The ongoing feud between Edappadi K Palaniswami and O Panneerselvam resulted in candidates having to contest as independents in the July 9 local body by-election. (ANI)