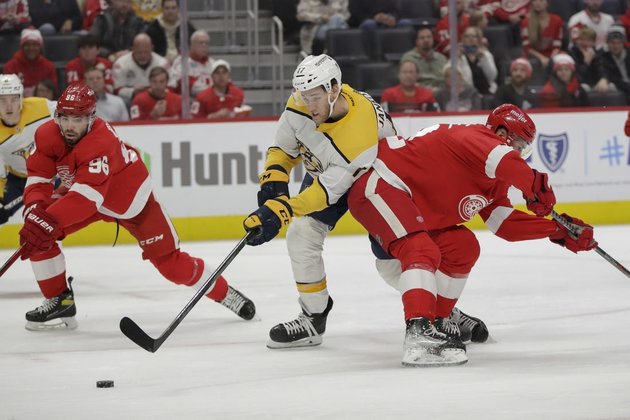 Ville Husso made 26 saves in goal to record his third shutout of the season and lead the Detroit Red Wings to a 3-0 home win over the Nashville Predators on Wednesday.

All three of Husso's shutouts this season have come on home ice for the Red Wings.

Kevin Lankinen also made 26 saves in defeat for Nashville, which has lost two of three (1-1-1) after winning three straight.

Nashville went 0-for-3 on the power play, while Detroit was 1-for-2 with the man advantage.

The Red Wings outhit Nashville, 29-18, and blocked 23 shots compared to nine for the Predators.

After a scoreless first period, Detroit got on the board with 15:51 remaining in the second period on a goal by Larkin, who took a loose puck at the Nashville blue line, skated in to the right of Lankinen and ripped a shot inside the far post to make it 1-0 Red Wings.

Nashville had a two-man advantage for 1:36 with 8:12 remaining in the second period, but Detroit killed it off.

The Red Wings then took advantage of a power play of their own, taking a 2-0 lead with 5:44 left in the second on a goal by Hronek, who blasted a shot from the point that went through a horde of bodies and past Lankinen on his glove side.

With 1:21 remaining in the game and a faceoff in the Detroit zone, Nashville pulled Lankinen. But the Predators couldn't find a way to get one past Husso.

The Red Wings then put the game away on an empty-net goal with 20.8 seconds left by Rasmussen, who skated down the ice, took the puck off of the boards behind the Nashville net and fired the puck past Nashville's Matt Duchene as he attempted to cover the empty net.

NEW YORK, New York - Concern about the spreading of Covid-19 across China kept investors on edge Monday, with all ...

LONDON, England: The UK National Crime Agency has obtained a civil recovery order for some $65 million of suspected criminal ...

Stocks markets across Asia Pacific rattled by protests in China

WASHINGTON D.C.: The U.S. is banning the importation of all communications equipment made by Chinese companies Huawei and ZTE, citing ...

BUFFALO, New York: Just ahead of the busy Thanksgiving holiday week, western New York state was hit by a snowstorm, ...

LOS ANGELES, California: Lyft and driverless technology firm Motional have announced the joint operation of a robotaxi service for residents ...

Lab-grown meat cleared by US for human consumption

WASHINGTON D.C.: The U.S. Food and Drug Administration (FDA) has announced that, for the first time it has cleared a ...

CLEVELAND, Ohio: After vandals broke into a farm and released up to 40,000 minks from their cages this week, thousands ...