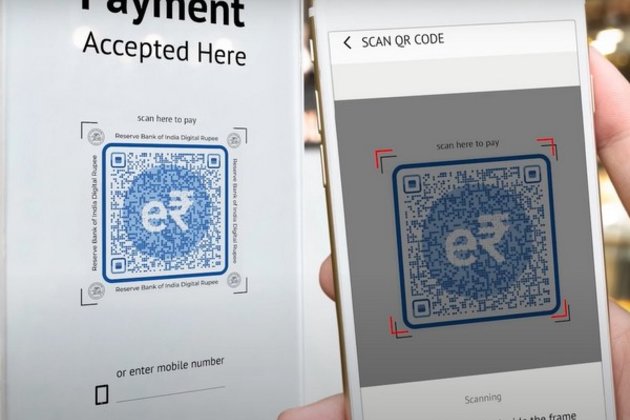 Mumbai (Maharashtra) [India], December 1 (ANI): The RBI on Thursday announced the launch of a digital rupee retail pilot for a closed user group.

"You would be able to use the digital rupee with the same confidence and trust which you place while using physical bank notes issued by the Reserve Bank of India. Through the use of token-based digital rupee, citizens will be able to make or receive payments in currency in completely digital mode through a mobile app," a video clip posted on social media by the Reserve Bank of India said.

"Based on the requirement placed by the banks, digital repay will be created by RBI using the latest technology and will be digitally issued to the banks in a secured manner. Going forward, the RBI will work towards the interoperability of the digital rupee with other payment systems. The pilot will cover a few cities with select banks," it added.

Transactions can be both person-to-person (P2P) and person-to-merchant (P2M). Payments to merchants can be made using quick response (QR) codes displayed at merchant locations, according to the RBI statement released before the launch.

The digital rupee would offer features of physical cash like trust, safety and settlement finality. RBI said as in the case of cash, it will not earn any interest and can be converted to other forms of money, like deposits with banks.

The statement said the pilot will test the robustness of the entire process of digital rupee creation, distribution and retail usage in real-time. Different features and applications of the digital rupee token and architecture will be tested in future pilots, based on the learnings from this pilot.

Eight banks have been identified for phase-wise participation in this pilot, according to the central bank. The first phase will begin with four banks, namely State Bank of India, ICICI Bank, Yes Bank and IDFC First Bank in four cities across the country. Four more banks, namely Bank of Baroda, Union Bank of India, HDFC Bank and Kotak Mahindra Bank will join this pilot subsequently, it added.

Concerns about recession in Germany after economy shrinks in Q4

FRANKFURT, Germany: Data released this week showed that the German economy unexpectedly shrank in the fourth quarter of 2022, indicating ...

TOKYO, Japan: In a statement posted on the website of the Chinese Embassy in Tokyo, Beijing announced that it will ...

BOSTON, Massachusetts: Russian businessman Vladislav Klyushin, who has ties to the Kremlin, has been accused of making tens of millions ...

TikTok CEO to appear before US Congress to discuss security concerns

WASHINGTON D.C.: As US lawmakers investigate the Chinese-owned video-sharing app TikTok, its Chief Executive, Shou Zi Chew, has confirmed that ...

US charges three linked to Iran in assassination plot